skip to main | skip to sidebar

A customer has recently experienced a possible memory leak in its NDB-API application. What he did was something like

over time and then he saw the RSS increasing. When he would have had a look a little longer he would have seen that the RSS consumption would increase up to a certain level and then becomes stable. Which is the expected behaviour. 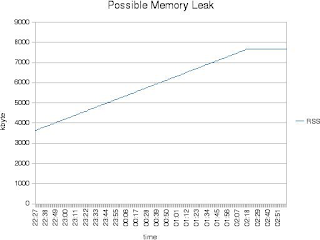 But how to explain to the customer that his application, which was in fact not doing anything, consumes more RSS?
With a diff over time on /proc/<pid>/smaps we found that this area was the reason:

But what is this meaning? To find the answer we did a strace on the program and got the following system calls:

OK. Somebody is allocating 2 times 2 junks of about 2 Mbyte of memory. But what the hell could this be??? During night I found the solution. It is the SendBufferMemory and ReceiveBufferMemory which I have configured in the config.ini to that size...

When you experience similar behaviour on your processes, maybe this little script can help you to find the problem: mem_tracker.sh

By the way, with an other customer we wound some other nice behaviour. But this time it was a mysqld: 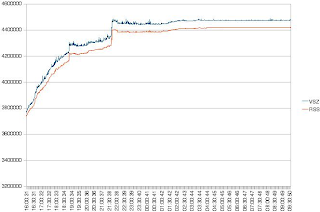